Return to Discover the Peconic

The Peconic Estuary is called one of the "Last Great Places" in the Western Hemisphere. Sunrise over the Peconic Estuary

The Peconic Estuary, cited as one of the “Last great places in the Western Hemisphere” by the Nature Conservancy, lies between the north and south forks of Long Island. It is 80 miles east of New York City on the eastern end of Suffolk County. The Peconic Estuary Study Area includes the Peconic Estuary and the land areas that contribute groundwater and stormwater runoff to the Estuary.

It begins at Brookhaven National Lab with the headwaters of the Peconic River, spans the several bays from Flanders to Gardiners, and ends in Block Island Sound between Plum Island and Montauk Point. In total the Peconic Estuary Study Area includes more than 158,000 surface water acres and 125,000 land acres. The Peconic Estuary Study Area consists of more than 100 distinct bays, harbors, embayments, and tributaries. 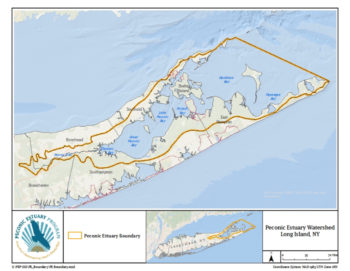 The year-round human population in the Peconic Estuary watershed is just 100,000. However, this population nearly triples in the warmer months with a high influx of visitors and summer residents. While the Peconic Estuary does not exhibit some of the widespread problems found in many highly urbanized and industrial areas, as suburban sprawl has expanded further east toward Montauk and Orient Points, human pressure on the Peconic Estuary has continued to grow. This increased pressure and the accompanied land use changes have affected the estuary in several ways, such as degraded water quality and habitat loss and fragmentation.

In 1985, Brown Tide, a harmful algal bloom caused by a rapid increase in the microalgae Aureococcus anophagefferens, turned the waters of the Peconic Estuary brown. The Brown Tide bloomed intermittently within the Peconic Estuary from 1985 through 1998. This type of algae is not harmful to humans, but its high concentration for a long period of time led to the near collapse of the Peconic bay scallop (Argopecten irradians) population, in addition to severe declines in other shellfish species. Brown Tide has also been tied to the decline in eelgrass (Zostera marina), the most ecologically significant species of bay-bottom plant in the Peconic Estuary system. The Brown Tide blooms raised concerns about the environmental health of the estuary and the associated economic repercussions. To address these concerns, a concerned citizenry called on governments and other stakeholders to preserve and restore the Peconic Estuary and its resources.

In 1992, the Peconic Estuary became the 20th estuary in the nation to receive the designation as an “Estuary of National Significance” by the EPA. The Peconic Estuary Program is responsible for creating and implementing a comprehensive management plan to protect the estuary. After years of hard work, the Program’s first Comprehensive Conservation and Management Plan (CCMP) was formally approved on November 15, 2001 by EPA Administrator Christine Whitman, with the concurrence of New York State Governor George Pataki. The CCMP promotes a holistic approach to improving and maintaining the estuary. Priority management topics include Brown Tide, nutrients, habitat and living resources, pathogens, toxic pollutants, and critical lands protection.

Today, the Peconic Estuary Program is working to update the 2001 CCMP to address the most current threats. The Program continues to work towards improving water quality, protecting and restoring habitat, educating the public and fostering environmental stewardship and fostering collaboration within the Peconic Estuary Study Area to preserve this important natural resource.